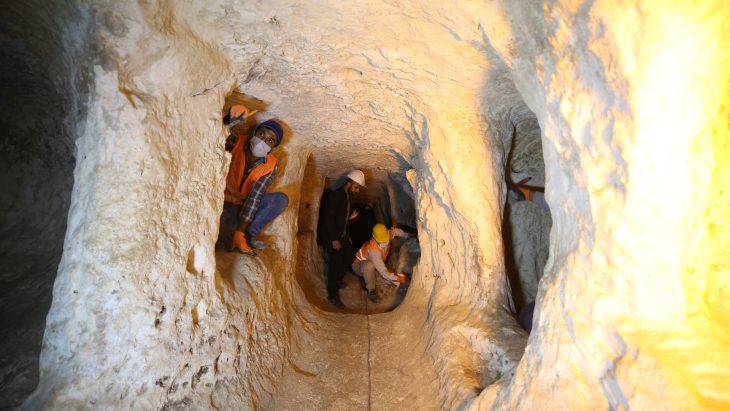 In Turkey archaeologists have discovered a 2,000-year-old underground city. The site of Mardin could have served as a refuge for early Christians seeking to escape Roman persecution.

Archaeologists have unearthed a vast underground city built nearly 2,000 years ago in southeastern Turkey, in Midyat, in the province of Mardin, reports the Livescience site. According to archaeologist Gani Tarkan, this huge underground complex may have been a protected space that early Christians used to escape Roman persecution. It could have housed up to 70,000 people.

The first underground chambers of the ancient complex were uncovered “two years ago during a project to clean up and preserve historic streets and houses in Midyat,” says excavation manager Gani Tarkan in ﻿Sciencepost . We learn that the first buildings of Midyat were erected by the Hurrians, a people who occupied parts of central and southern Anatolia (in present-day Turkey), during the Bronze Age. The places were in turn occupied by the Arameans, the Persians, the Greeks, the Romans, the Byzantines and the Ottomans.

“It could be the largest underground city in the world”, according to the archaeologists in Turkey and taken up by the Anadolu agency

The researchers first discovered a limestone cave, then a passage to the rest of the hidden city. “Some locals knew there were caves under Midyat, but didn’t know there was an entire underground city,” Gani Tarkan, also director of the Mardin museum, told the Turkish government agency. According to the first elements found by archaelogists in Turkey on site, and the decorations painted on the walls, this underground complex “would have been built during the second or third century of our era”, underlined the person in charge of the excavations. The place is huge.

Archaeologists estimate that only 3% of this underground city, now known as Matiate, has been explored so far. They believe the cellars and corridors of the city may have housed up to 70,000 people, a large city by the standards of the time. According to them, the underground city could have served as a refuge for the first generations of Christians who tried to escape the persecutions orchestrated by the Roman imperial power.

Christianity was not an official religion in the 2nd century. Also, according to archaeologists, many families concerned with this religion at that time generally took refuge in underground cities to escape persecution from Rome. It is therefore possible that the Midyat complex was also built for this purpose. These persecutions continued until AD 313, when Emperor Constantine issued the Edict of Milan, making Christianity the official religion of the Roman Empire.

It is therefore a real treasure that has been discovered by the Gani Tarkan team. For now, only a small part of the caves has been unearthed, excavations will continue under the entire old town.