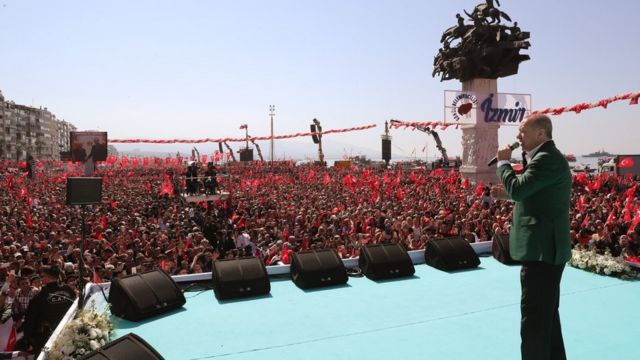 ‘Don’t forget Izmir’: These are the words of the Turkish President.

Greece will pay a “high price” if it continues to violate Turkish airspace and “harass” Turkish planes in the Aegean Sea. These were the very harsh words uttered this Saturday by Turkish President Recep Tayyip Erdoğan. For several days, Ankara has accused its neighbor of having used its S-300 air defense system to target Turkish planes on a mission in this area. These threats come in a particularly tense context in recent months between Ankara and Athens.

Words and historical references are not chosen at random. Recep Tayyip Erdoğan knows perfectly well how his words will be interpreted in Athens and among the Greek population.

On the stage of an aerospace and technology festival, where Turkey notably exhibits its famous combat drones, the Turkish president issued clear warnings to Greece.

“If you go further, you will pay a high price, very high! Your occupation of the islands (of the Aegean Sea, editor’s note) does not bind us in any way. When the time comes, we will do what is necessary. We can arrive one night without warning We only have one word for Greece: don’t forget Izmir!”

This last sentence refers to a decisive episode in the Turkish War of Independence, when, in 1922, the forces of Mustafa Kemal, the future Atatürk, expelled Greek soldiers from the Aegean city of Izmir, which they had occupied since dismemberment of the Ottoman Empire. A “war of liberation” launched three years earlier from Samsun, the city on the shores of the Black Sea where Tayyip Erdoğan gave his speech.

In Turkey, these threats are presented as a response to Greece, accused of having pointed air defense missiles at Turkish F-16 fighters three times in recent weeks during reconnaissance missions over the Aegean. Ankara and Athens oppose each other in particular over the course of their maritime and air borders in this area.