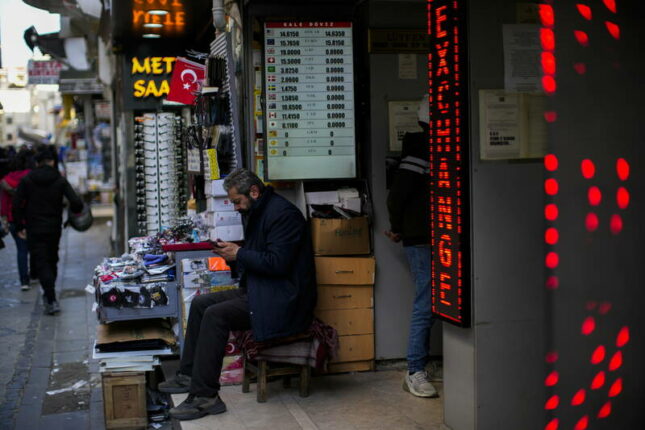 The inflation in Turkey, caused in particular by the policy of President Recep Tayyip Erdogan, who persists in lowering interest rates, threatens to spiral out of control.

The fall of the Turkish lira seems endless. In the country, some stores have given up displaying prices as it seems impossible to follow the day-to-day evolution of inflation which is plaguing Turkey’s economy. In August, it crossed the 80% mark, against 79.6% in July, a record level since 1998. The price of staple foods, such as tomatoes, has soared and sometimes increased by up to 300% within a year. In recent months, anti-theft devices have even appeared on supermarket shelves, as many everyday products can be bought at exorbitant prices.

Despite two increases in the minimum wage since January 1, the surge in prices is becoming difficult to sustain for a large part of the Turks. “Now in Turkey, we buy fruits and vegetables individually. The increase in the cost of living is not offset by a fairly substantial increase in wages, so we are in an inflationary spiral comparable to what Turkey experienced in the early 1990s. The population in Turkey is suffering these consequences, on the one hand because of inflation and rising prices, but also because of the strong devaluation of the currency. This phenomenon has been boosted by the Ukrainian crisis, particularly concerning agricultural products”, analysis for Libé Jean Marcou, specialist in Turkey and holder of the Mediterranean and Middle East chair at Sciences Po Grenoble.

“The biggest problem we are currently facing is the cost of living,” admitted Recep Tayyip Erdogan on Tuesday August 30. If the Turkish currency has lost 55% of its value in one year against the dollar, it is above all because the Turkish President persists in lowering interest rates, contrary to traditional economic theories, which consider on the contrary that such policy favors inflation in Turkey. Result: a continuous fall in the value of the pound, the currency in Turkey, and double-digit inflation since 2017. “Turkish President Erdogan continues to play the growth and export card. He refuses to take significant economic measures in the face of the severity of the crisis, and claims that the problems are solely due to Western domination of economic products. It’s a totally devastating speech”, underlines Jean Marcou.

In August, the Turkish Central Bank again lowered its main interest rate from 14% to 13%, fueling the rise in prices. The monetary institution is dependent on the tribulations of power. With each new economic announcement from the government, the same scenario: the pound plunges, the Istanbul stock market unscrews. “Now the whole system is only holding up thanks to ever-increasing inflation in Turkey. Since Erdogan has boosted his economic growth with credit for many years, the end of the rise in prices would jeopardize the ability to repay the debts contracted by individuals, leading to a banking crisis. This may also be one of the reasons for Erdogan’s eccentric position”, analyzes Matéo Teixeira, specialist in inflation and debt, doctoral student in economics at the University of Lyon.

In Turkey, the inflation figures are the subject of a deep disagreement between, on the one hand, the National Institute of Statistics of Turkey (Tüik), controlled by the State, and, on the other, independent economists from the Inflation Research Group (Enag). The latter, who estimate that inflation has reached 181.4% in one year, accuse the Tüik of underestimating the extent of inflation by half. Suspicions heightened since Erdogan’s dismissal last January of the director of the national institute, Sait Erdal Dinçer, after he declared to the press that he refused to disguise the inflation figures, having “a responsibility -to the 84 million Turkish citizens”.

Faced with the deterioration of the Turkish economic situation, it is difficult to envisage a way out of the crisis in the absence of changes in economic policy, nine months before the next presidential election. At the risk of Turkey sinking into a downward spiral. “The most worrying thing would be if the situation degenerated into hyperinflation [prices rising 50% per month], which would lead to total disruption of the economy. With an annual increase of 80%, we are not yet in this scenario, anticipates specialist Matéo Teixeira. But we see that the spiral is in place, inflation is self-sustaining. If Erdogan continues to turn a blind eye to the situation, this catastrophic scenario could come true.”